Still going - though not at fast rate 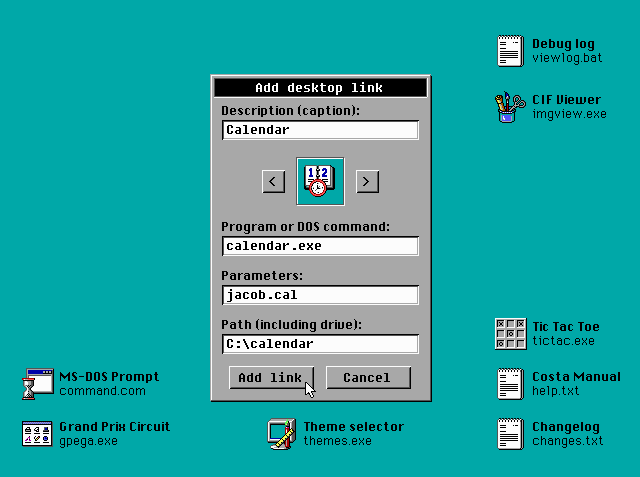 Wow, it’s definitely been a while since I last updated! Even though my career in the navy has taken a whole lot of my spare time, I’ve been able to work a little on Costa every now and then on weekends. Since my last post I’ve ironed out quite a few bugs and rewritten a lot of code. Visually the interface looks the same, but all executables have been reduced in size and improved in performance. Good stuff!

I’ve also written the second accessory for Costa (the first one being the theme switcher). It’s a Tic Tac Toe game, but unlike the one that was included a long time ago with a previous version this one can play both human vs. human and human vs. AI. It’s simple, but it works - and it can actually beat you! I know a text editor or something like that would have made a more useful accessory, but I’ve always been wanting to mess around with AI. And it’s nice when you have a minute to spare.

I’ve done a lot to make the interface as clean and functional as possible, while also making it nice to look at. There’s consistency between all parts of the GUI, for example controls are placed in the same way and have the same size and spacing throughout the interface.

So, at the moment the only thing holding me back from a 1.0-release is the lack of accessories. The desktop and accessories I’ve already written are actually done, and only need some testing before I release. I can’t wait to get 1.0 out on the net - I have, after all, been working on it for 5 years now.

Instead of making any promises about updates and release dates, which could end up being postponed because of other things going on in my life, I will just come here whenever I have something to tell or release.